← The nitter-natter of tiny feet

Our Soho Square bird list is nothing to boast about. Just 25 species in 11 years! But then we are in central London, without a blade of grass for miles, if you discount the obsessively manicured gardens of Soho Square itself. Even this little patch of green is barely visible underneath the masses of random, sun-seeking bodies that fill the square on sunny days, and it’s shaded by tall sterile plane trees that support a lot less microfauna than a good, solid native oak. Nevertheless, we’ve had our moments: the occasional Mallard strolling across the lawns looking for a puddle of water, a fly-over Grey Wagtail, Redwings migrating overhead in winter, and even a Willow Warbler once in August. A Sparrowhawk eating a pigeon caused quite a stir amongst the non-birding staff of our office, and has been seen a couple of times subsequently. A few years ago, a flock of 120 Waxwings descended on Fitzroy Square, just a few minutes to the north of us. This was sensational for Central London, and when we were walking back to the office a flock flew south along Charlotte Street towards Soho Square – but we weren’t there to get it on the list!

The Bloomsbury Sparrowhawk tucks into an unfortunate pigeon. Photo by Nick Humphrey.

This year, after years without an addition to the list, we’ve had two. A pair of Goldfinches has taken up residence in the square. They were first found by Jim, but are now to be heard singing or twittering on most days. Then, a snatch of song on 6th May alerted me to the presence of a Black Redstart in Frith Street. It did not show itself, and a frustrating few days went by before it was heard again. The next time it was a few streets away, but again it was not seen. Finally, I nailed it back in Frith Street, and I was lucky enough to actually see a pair. Since then, it’s been fairly regular in the Frith and Greek Street area, being recorded as far afield as Chinatown and Great Marlborough Street.

Black Redstart, taken earlier from the office window*. What a cracker.

We’d been hoping for this city speciality for some time. Jim thought he’d got one a couple of years ago, but it turned out to be someone’s Canary singing away from the balcony of a top floor flat! Black Redstart is a rare breeding bird in Britain. It only started breeding in Britain on bombsites in London in 1940, and its population remains fairly stable at only around 100 pairs in the entire country, mostly in towns or on power stations. So, it’s a pretty scarce bird, and to have a pair around your usually rather birdless office is quite a treat. 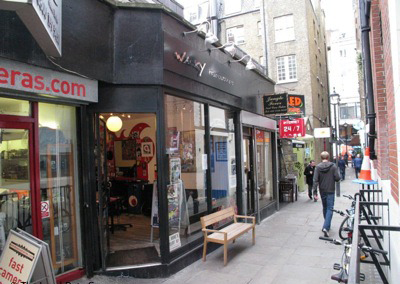 ← The nitter-natter of tiny feet