Small, drab, dull-brown birds that like to skulk deep in the undergrowth are of disproportionate interest to large swathes of the birding community, and I must admit I’m as susceptible as the next man to their allure. So I’m particularly pleased to be working at the moment on our forthcoming Helm Identification Guide Reed and Bush Warblers, which is jam-packed with hard-to-see (and often extremely-hard-to-identify) species such as these.

I was double-pleased, when researching the images, to find that there were a few species that have simply never been photographed (or if they have I can’t find any!), and one of these was the Cook Islands Reed Warbler. And I was about to go to the Cook Islands. So I decided to take matters into my own hands and fill this gap myself.

The bird occurs on two islands – Mitiaro, which is virtually impossible to get to, and Mangaia, which is only very, very difficult to get to. I plumped for the latter.

To say Mangaia is remote is something of an understatement – I was met off the tiny plane from Rarotonga by the Minister of Tourism, who told me that not only was I the only tourist on the island, I was the only one they’d had for three weeks. Its an amazing place, once you get past the initial shock – the people are warm, friendly and rugby-obsessed, and there’s good birding to be done – watching two species of tropicbirds soaring high above the coral cliffs was a sight I’ll never forget. However, the undoubted star of the show is the island’s endemic kingfisher, found nowhere else in the world.

White-tailed Tropicbirds do their thing, high above the taro swamp.

And then there’s the reed warbler. Very much a bird for the connoisseur, this little brownish-yellow bird is common throughout the island, even in the ghastly, useless introduced pine plantation on the coral plateau that girdles the island. It doesn’t seem too bothered by the lack of habitat, or the infestation of rats and cats the island seems to suffer. Its jangling song, a bit like a Blackcap after a few too many rums, became a welcome soundtrack for my time on the island.

My favourite acro. What's not to love?

The world will see the fruits of my subtropical labour of love when the book comes out in November … if by chance you’re heading to Henderson Island in the Pacific before then and you fancy tracking down and photographing a small, brown, endemic warbler, do let me know …

Learn more about Cook Island, Henderson, and many other warblers here: 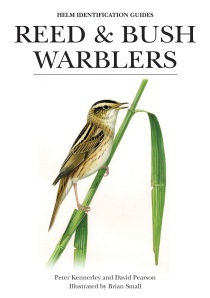